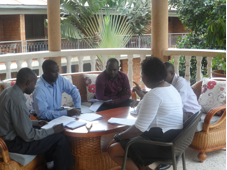 A brief was made on the purpose of the Participatory Local Democracy Index (PLDI) and its components and also on the legal provisions in Uganda. This gave participants background information on the subject and the agenda for the day. The group was divided into 2 mini groups whereby one group handled Active Citizenry, Political Decentralization

and multi–stakeholder planning. The other mini group handled Administrative Decentralization and Fiscal Decentralization. Each group made presentations and participants agreed on each item of the questionnaire / PLDI. The following were the key areas noted during the discussion: