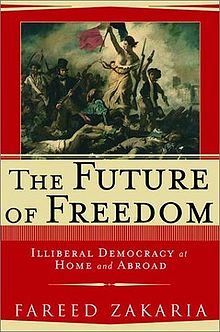 Examining the modern world’s political systems, The Future of Freedom explores Fareed Zakaria’s distinction between democratization and liberty — or what we might in development circles refer to as “deepening democracy” beyond elections. Zakaria argues that democratization, or increasing the number of people involved in democracy, can actually lead to chaos without “some measure of order as well,” whereas liberty springs from “regulated, representative democracy.” (19-20) Zakaria portrays the modern world as one in which “democracy is flourishing; liberty is not.” (17)

The Future of Freedom defines democracy only to require the existence of elections (for example, 18) and identifies a trend towards greater such democracy in the 20th century. However, Zakaria argues that at the time Western countries were undergoing similar transitions to democracy, their expanding democracies were tempered by a simultaneous trend emphasizing the ideals of constitutional liberalism, or the protection of “an individual’s autonomy and dignity against coercion, whatever the source- state, church, or society.” (19)

Zakaria analyzes constitutional liberalism as a series of power struggles — first between the Catholic church and rulers, then between lords and kings, then within the Catholic church itself, and finally, through capitalism. The lesson Zakaria draws from all these power struggles is the importance of institutions for successful democracy: “for the rule of law to endure, you need more than the good intentions of the rulers, for they may change. You need institutions within society whose strength is independent of the state.” (33)

As The Future of Freedom progresses, Zakaria focuses on the problems resulting from rapid democratization without liberalism. Be it in India, where the author is from, or in the United States, where Zakaria focuses half of his book, he warns of the ability of minority groups to twist democracy to their own ends due to their outsize financial resources, power, or ability to influence the masses. (59-198) In the Middle East and many Islamic countries, Zakaria argues that political discussion has been circumscribed to mosques because governments have so successfully subverted the institutions that would otherwise allow more broadly-accessed political discussions. (122 – 123)

Zakaria portrays the problems of rapid democratization as particularly acute at the national level, due to such governments’ tendency to encroach on the powers of sub-national governments and other elements of society. (102) Such centralization often leaves “few internal checks” (103) and provides less motivation for politicians to bring groups of diverse backgrounds together in collaboration.

The Future of Freedom ends with, amongst other things, a call for an increase of delegation of democracy from open national forums where decision-makers experience pressures from “interest groups, lobbies, and political campaigns.” (250) Zakaria suggests that increased reliance on institutions and sub-national governments are necessary to promote healthy liberal democracies, stating, “Woodrow Wilson took America into the twentieth century with a challenge to make the world safe for democracy. As we enter the twenty-first century, our task is to make democracy safe for the world.” (256)