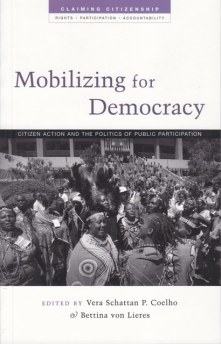 In Mobilizing for Democracy, case studies from Bangladesh, India, Brazil, Angola, South Africa, Kenya, and Nigeria analyze the link between citizen mobilization and achieving specific outcomes through democracy. Each in-depth portrayal provides a historical, legal, and social context, as well as depicting the everyday realities of organizing citizens.

Mobilizing for Democracy addresses four overarching topics: associational mobilization, social movements, citizen involvement in political institutions, and where and how citizens participate. The authors consider democratic outcomes according to the following terms:

Social movements. Case studies of indigenous peoples’ movements and the right to health care in Brazil, the ‘anti-third term’ political movement in Nigeria and the South African Homeless People’s Federation provide evidence of how the role of CSOs varies depending on the state of democracy. In weaker democracies, citizen mobilization builds identity and capacity around democratic participation. In stronger democracies, social movements and active engagement within the formal institutions can successfully introduce new political agendas and struggles for rights, as well as rendering the policy-making process more inclusive.

Citizen involvement in political institutions. Case studies on the activities of dalit (or low caste) groups in village government councils in India, citizen participation in the governance of local health councils in Brazil, and the entry of civil society actors into formal politics in Kenya demonstrate how participation in the social movements and CSOs discussed in previous sections improves citizen capacity to participate in formal political institutions. Civil society mobilization plays a crucial role in building the political structure, institutions and culture necessary for citizen involvement and a “deepened” democracy.

Where and how citizens participate. The final section provides an overview of various styles of participation by analyzing the impact on social participation of passive and protesting groups in South Africa and the different leadership styles in Brazil. Styles of activism are formed by past political participation and the history of individual citizen leaders — but are also impacted by cultural norms, the reaction of the state to activism, and the nature of the networks and ties the organizations has established. The case studies show that a diversity of connections and networks linking state and society can enhance opportunities for mobilization.

Mobilizing for Democracy concludes that democracy is not built solely on political institutions or development initiatives alone, but that citizens and their mobilization makes a difference — by articulating concerns, developing capacity for political engagement and pressuring the state into accountability through the policy process.